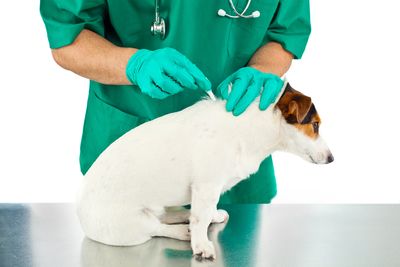 DA2PCPV (Vanguard Plus 5)  This is a yearly vaccination that includes several viral agents important for the health of your pet.  Canine Distemper, Adenovirus/Hepatitis, Parinfluenza and Parvovirus are all included in this one injection.  Sometimes we forget how important these vaccinations are.  Before we started vaccinating for these diseases most pets that contracted them died.  Fortunately, we can easily prevent them by using modern vaccines.

Rabies (Defensor3 by Zoetis) Rabies is 100% fatal in both humans and animals if contracted.  Since there is no cure, prevention by vaccination is the only solution.  Vaccination is extremely important and required by law as humans can transmit Rabies easily, too.  This is always a yearly vaccine in cats but some dogs may be eligible for Rabies vaccinations every three years.  This is governed by city and county laws so it will depend on where you live.  We can determine what your pet’s specific needs are during their yearly appointment.

Bordetella (Recombitek ® Oral Bordetella by Merial)  This vaccine is usually given every 6 months especially to dogs that have a high risk of exposure such as boarding pets, groomed pets, pets that travel with owner frequently, play at a dog park, etc.  It is a respiratory disease that is best described as bronchial pneumonia and similar to Whooping Cough in humans.  While it usually is not fatal, it can cause great discomfort for your dog and be extremely annoying to owners due to constant coughing.  It is also very contagious between other dogs.

Non-core vaccinations are optional and are considered based on your pet’s exposure and risk.  Some of these considerations are based on geographical or lifestyle differences between pets, such as, does this pet go bird hunting in west or south Texas?  Does this pet travel to dog events, like conformation shows or performance events?  Is this pet a city dog or a country dog?  Does this pet board where such vaccines are required?  These different lifestyles will be discussed with you and the veterinarian.  Vaccines that are considered non-core are Leptospirosis, Canine influenza (H3N2), Lyme Vaccine and Rattlesnake Vaccine, to name a few.  In general, these vaccines are considered less effective in protecting against a disease than the core vaccines are but may add an extra layer of immunity in case of exposure.

Leptospirosis (Vanguard L4).  Leptospirosis is a bacterial disease than can affect all mammals including humans.  It is transmitted through the urine from infected animals.  Therefore, we consider vaccinating all dogs that have an increased risk of drinking from possible contaminated water sources.  These dogs include dogs that live on large open areas of land especially with multiple animals such as farms, live on or frequently visit areas with lakes, ponds, etc., and hunting dogs.  Your typical indoor and backyard fenced in dog is considered a low risk for contracting Leptospirosis and we generally do not recommend vaccinating them.

Canine Influenza – H3N2 (Nobivac® Canine Flu Bivalent by Merck)  Canine Influenza virus, H3N2, emerged in the United States in greyhounds in Florida in 2003.  The virus is now enzootic in many dog populations in Colorado, Florida, Pennsylvania, New Jersey and New York.  The virus causes upper respiratory signs including coughing, nasal discharge and low grade fever usually followed by recovery.  A small percentage of dogs develop more severe signs in association with hemorrhagic pneumonia.  In 2015, the virus was seen in Illinois and several other states including California.

Influenza vaccine may reduce clinical signs and virus shedding in dogs such as those that board.  Vaccines may also have potential to interfere with serological testing, which in non-endemic areas are useful to assist in diagnosis. 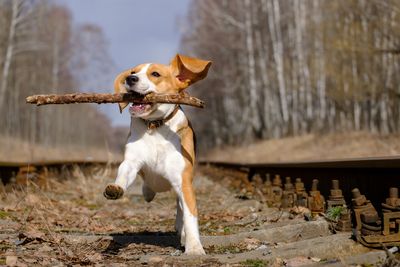 Canine Borrelia burdorferi (Lyme) Vaccine (this vaccine is generally not kept in hospital and may need to be ordered for your pet).  The incidence of Lyme disease in Texas is currently considered extremely low.  Furthermore, use of the vaccine even in endemic areas (such as the east coast of the US) has been controversial because of anecdotal reports of vaccine-associated adverse events.  Most infected dogs show no clinical signs and the majority of dogs contracting Lyme’s disease respond to treatment with antibiotics.  Furthermore, prophylaxis may be effectively achieved by preventing exposure to the tick vector.  If travel to endemic areas (like the east coast) is anticipated, vaccination could be considered, followed by boosters at intervals in line with risk exposure.  Again, Shelley Drive Animal Clinic does not stock Lyme vaccine and or recommend it for use in dogs that solely reside in Texas.

Rattlesnake Vaccine (Crotalus Atrox Toxoid by Red Rock Biologics)  Rattlesnake bites are a veterinary emergency even if your pet has been vaccinated.  Rattlesnake venom is a complex mixture of toxins that spreads through a dog’s body following the bite.  This vaccine that was developed by Red Rock Biologics is developed specifically to help defend dogs from the dangerous effects of rattlesnake venom.  This vaccine is recommended for any dog that frequently visits places where rattlesnakes are found.  Whether it is camping, hiking, or hunting, dogs can stumble upon a snake by accident.  Even if your dog has been vaccinated with the Rattlesnake Vaccine and is bitten by a rattlesnake, or any snake for that matter, your pet should be seen by a veterinarian as soon as possible.  According to AVMA, canine task force have listed this vaccine as not generally recommended, because “the diseases are either of little clinical significance or respond readily to treatment.”  This may be discussed with the veterinarian pertaining your pet’s exposure and best interest.  Shelley Drive Animal Clinic does keep this vaccine in stock.

We look forward to hearing from you

Find us on the map